Thorben Stemann: “Users asked my bot for her picture” 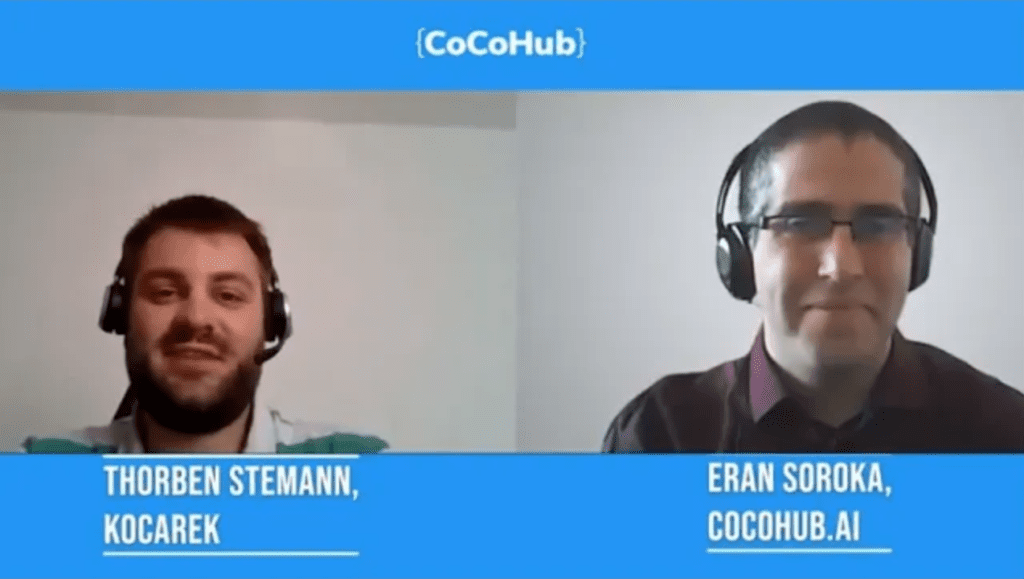 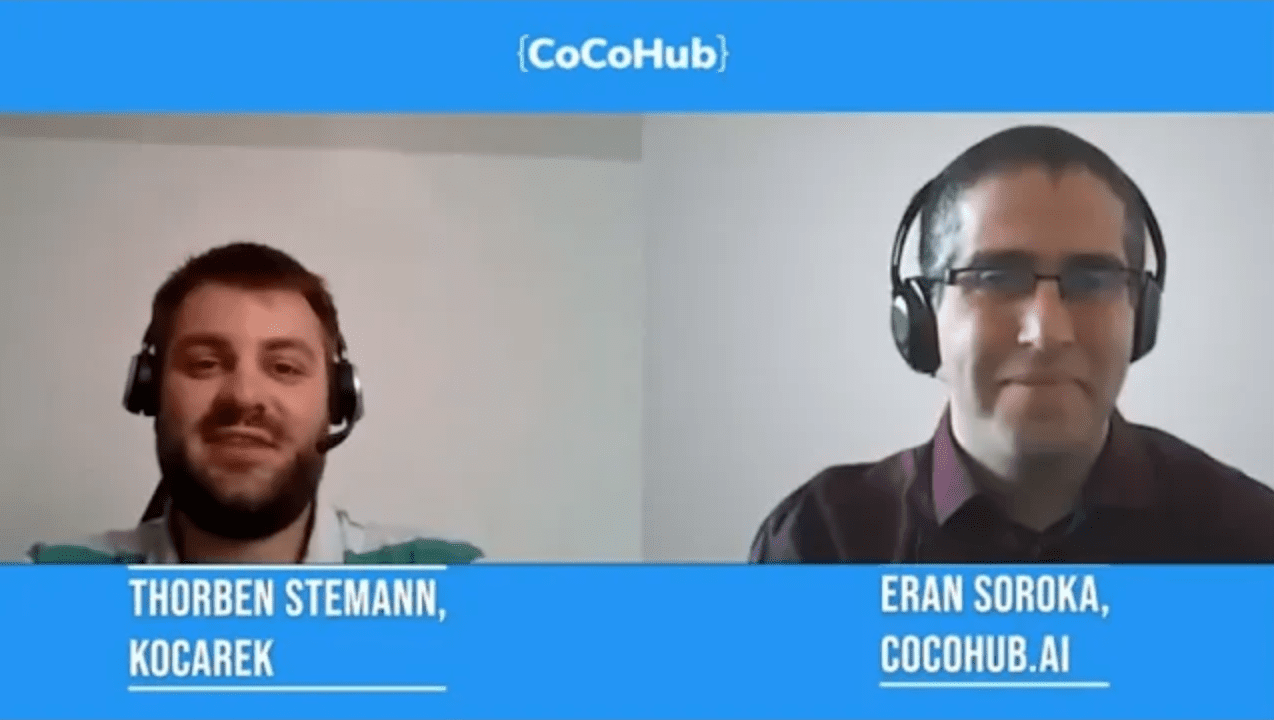 A Chatbot, as we know, can help millions of people every week. But sometimes the challenges can come when you have a narrower, more defined and, most importantly, a returning audience. That’s what happened to Thorben Stemann, who wasn’t even initially hired to run a chatbot for his translations company, Kocarek GmbH – but found himself programming pictures of electric circuit to address, err, strange requests by his users. He talks about that and more, in the 9th episode of Taking Turns.

Quite by accident, actually. I finished my masters degree in 2016 and right out of university I got a job working on automatic grammar correction for German initially, and then for multiple languages, as a freelance project manager. I wanted to find something more stable, and Kocarek hired me.

Initially I applied for something completely different, but the CEO wanted to get started on chatbots, because a customer wanted to have a chatbot translated, and they didn’t really know how. We went through a new process for translation and then, on top of that, we decided to also get deep into chatbot design, conversation design. Not only from the angle of translation, but be a service provider all around that.

I’m currently still the sole employee responsible for our own chatbot. And I’m currently trying to build up a network of conversation designers, bot-platform providers, customers that want a chatbot, and bring all of these together.

DO YOU WANT TO BECOME A COCO DEVELOPER? JOIN OUR TRAINING PROGRAM!

• WHAT’S THE bot or PROJECT YOU’RE MOST PROUD OF?

Well, since I haven’t really worked for any ground-up project yet, it would be our own bot I built, on our website. It’s currently only in German but we’re planning on expanding at to English, at least, in the near future. The bot is quite rough around the edges still, it’s been alive for about a half a year now, and it’s going great.

Since we have a lot of repeat customers, we don’t really expect our customers to go onto our website, type into the chatbot to be re-directed or start a project or something of that. Usually our customers call us directly because they already have rapport. What the chatbot is for, primarily, is a kind of a tech demo. It shows we know what we’re doing in this field, and this is what we can also provide for you.

• How MANY of your SITE visitors are starting a conversation with the chatbot?

Our website is not frequented that much anyway. Since we’re a local company, more so than maybe other providers of translation, we have a very loyal customer base. We’re not appealing to the mass, but to a select few with a very high quality standard. That’s pretty much our model.

• WHAT’S THE ONE THING EVERY CHATBOT or VOICE ASSISTANT MUST HAVE, IN YOUR OPINION?

Pretty much personality, something that makes it interesting. I’ve seen a lot of chatbots now that as soon as you go just a little bit outside of their area of expertise, they throw up their hands and say ‘I don’t know what you’re talking about’. And I find it always interesting if you can have an actual conversation, or something that approximates it – with questions about ‘what do you do after work?’, or ‘what do you do in your free time?’.

A lot of people, I feel, try out these things with the bot; I’ve seen messages on our logs that ask for pictures of the bot, like, ‘can you send me a pic?’. Ok… So we programmed in a little intent that just sends random pics of circuit boards, something funny like that.

If your bot talks to a lot of users per day – I don’t think that you necessarily need personality. But if you have a lot of repeat customers and repeat conversations with the same people, I feel like that is something that is underestimated, how much conversations actually get steered up just into that off-topic stuff.

• TELL US ABOUT AN AWKWARD, AMAZING OR CURIOUS THING THAT HAPPENED TO YOU DESIGNING your chatbot.

I feel like the photos story is the funniest one. Just looking at some of the dialogs users type, especially since our bot doesn’t have so many users, it’s always interesting to me that whenever someone does chat with her, the two turns are usually very precise and then, after that, they just type whatever. They haven’t asked her out yet, wierdly enough. But I feel like having the question for the picture was a precursor to that.

• WHAT TIPS CAN YOU GIVE TO ASPIRING CONVERSATIONAL DESIGNERS, OR TO PEOPLE WHO WANTS TO Create a chatbot?

I found it by happenstance and I’m doing it for only about a year. So I would say, don’t be afraid of it, Don’t stress out about it. Just go for it. If you can write text that people want to read and find engaging, you can probably write engaging conversations. If you have technical expertise, you can probably build a bot. With all the tools out there, even someone that doesn’t know how to code can build a bot. But if you know how to code, it’s definitely an advantage

• TELL US MORE ABOUT YOUR WORKPLACE, KOCAREK.

Since I’m fairly new, I’m experiencing our benefits as I experience more about what customers do we have. About what do they want from us. I feel like what we mostly do, is just customer satisfaction at the top level, that’s what we strive for. Whenever someone comes to us with a problem that we’ve never seen before, we invest time and effort into finding out how to best process the request to the customer’s satisfaction level that they desire.

I got hired because a long-time customer wanted to translate a bot he had. They didn’t tell us it was a bot at first, because they thought it didn’t matter; but it does. The way that a bot speaks to your customer, should be very high quality, right? You don’t want it just run it through Google and just present that. So that part needs to be translated very well.

“You can’t just translate the sentiment”

On the other hand, all of the training data needs to be translated as well. Depending on what system you’re in, you’re not training all of your languages all at once, but each language individually. So you can’t just translate the sentiment, the intent. You also need to find multiple ways of saying the same thing, to represent your training data well in that language.

We feel like the customers didn’t think about this. And I don’t feel like other translation companies are necessarily thinking about this as well. Bot providers, as far as I can tell, never really have this experience with multiple languages, unless they’re in a country where that’s necessary, like Belgium. So, I feel we provide it more than any other company I’ve been in touch with yet. And we’re trying to build a network and try to raise awareness that language is a very important part of the entire project. Not just the coding.

Because the entire field is so heavily dependent on English, like most technology fields. English is the first language that gets programmed into everything. And because of English is, grammar-wise, relatively simplistic, as soon as you add languages like Russian it doesn’t work anymore.