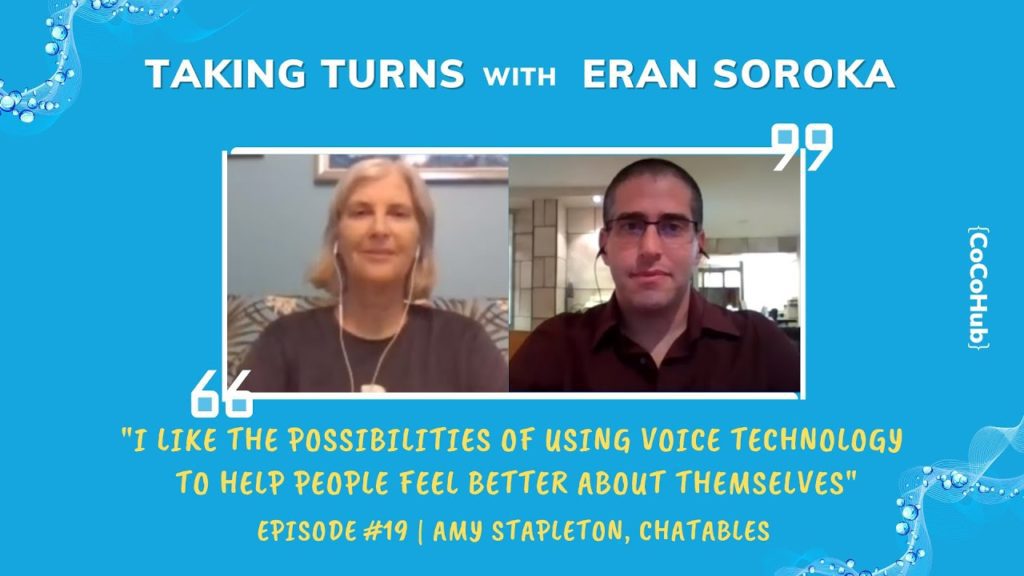 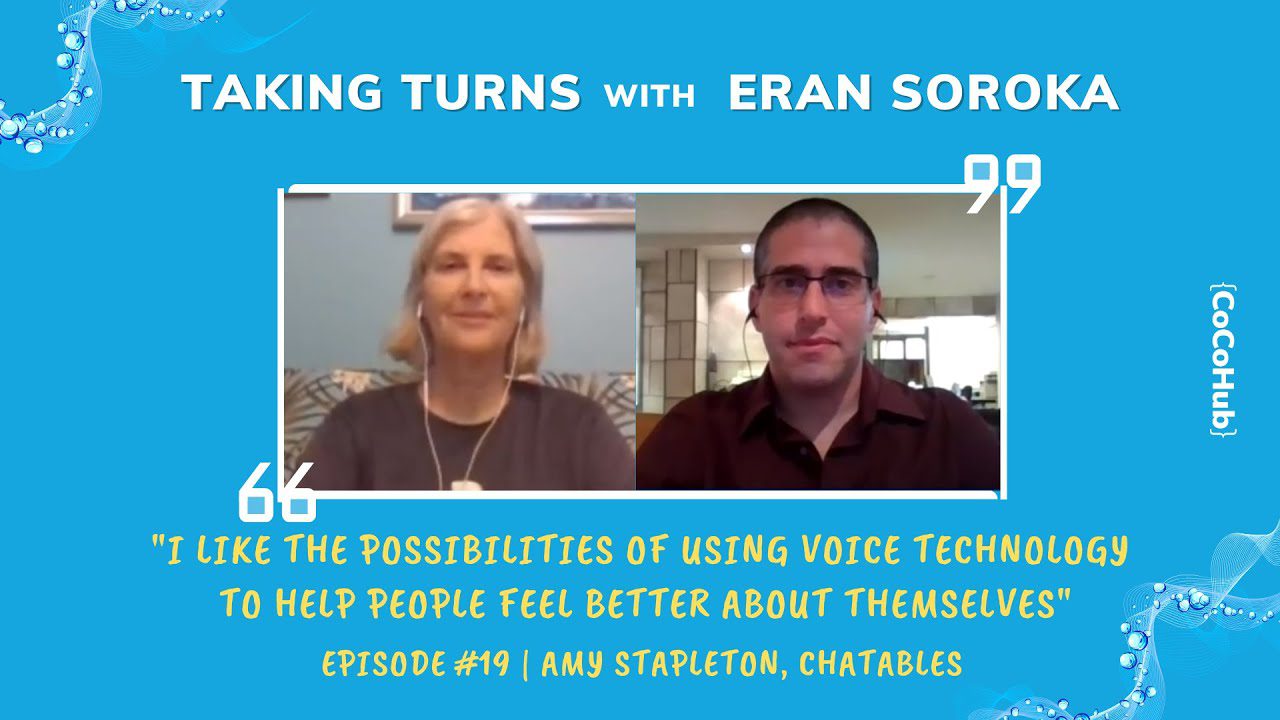 Today, every person needs to be a storyteller. To know how to convey a message in a fascinating way, to be able to hold people with anticipation for more. But since chatbots are trying to imitate human interactions, why can’t chatbots or voicebot tell a story? In a world where so many people are lonely, Amy Stapleton is going in a special direction – storytelling chatbots. Now, she wants to have the best authors of the planet for Chatables and on her side. Oh, and by the way, she worked for NASA – so she won’t rule out other planets as well.

• How did you become a conversation designer?

I’m not even sure I would call myself a conversation designer. I’ve always been interested in the concept of virtual personalities that can engage you in just fun dialogue. But also, more like narrative experiences, it’s like you’re meeting someone who’s telling you a fun story. So I kind of made myself into one.

I had a career in IT, and then as I got ready to retire I wanted to get into this world of, virtual personalities, virtual agents, whatever they were called. And so I just followed that path and started creating interactive storytelling type skills for Amazon Alexa. And I’m continuing to do that because it’s just a lot of fun.
I think there’s a need for it, there’s a market for it, and so I’m continuing to do it.

Do you want a chatbot connected to a Zoom in your business? Here’s how to do it.

• You’ve been a part of NASA for 13 years. Can you see any similarities between two fields of breaking boundaries and uncharted territories?

That’s pretty good… working at NASA, we had a lot of big projects and some of them took a long time to implement. There, you just have to celebrate your little successes, your milestones along the way, and not lose hope and not lose faith. And the journey within voice right now, it’s kind of like that. Because we’re all headed to some faraway target like Mars, and it’s going to take a lot of time to get there, where we want to go. And I think we just have to keep building upon our incremental successes.

• let’s talk about storytelling chatbots, because storytelling is one of the buzzwords in today’s market. you’re taking it to voice interfaces. Why is it so important?

There are a lot of definitions for storytelling. Everybody has a different definition. For me, and for what we’re trying to do at Chatables, we’re attempting to create like virtual personalities that are almost like imaginary friends that could be with you.

If, let’s say, you’re isolated as a senior and you don’t have a social network around you, people you can talk to. So you can engage with one of these virtual personalities and they draw you into their life. They let you know what’s going on in their life and they engage you in a way that makes you feel like – Ok, I’m part of the social world that they’re telling me about. Talking to them, they’re acknowledging me and their input and they’re using that and I just feel like I’m connected to the world. And you know, it has kind of a therapeutic aspect to it.

💬 Previously on Taking Turns – Check out the whole playlist 💬

So for me, I like the possibilities of using voice technology to help people feel better about themselves, maybe open them up to different types of experiences. And I think storytelling chatbots is a really good way of doing that. And again, storytelling for us is not like your traditional ‘I’m going to tell you this big adventure and make you choose which path you want to go down’. We’re not doing that. We’re creating more conversational experiences that’ll make you feel like you are engaging with someone that cares about your opinion, but also wants to share like something interesting is happening to them. So that you’re just not, you know, bored.

• And that’s why Chatables was founded? To support this kind of storytelling interfaces?

Yes, I would say so. I have this vision of the conversational storytelling style and I want to introduce that to authors. I want to get more and more authors to join me in developing this style of storytelling.

So we created some tools that they can use. And we’re starting to build a community of authors that really like the the idea of writing stories for these virtual characters. So yeah, I think that they’re I do think there’s a need for it. I think there’s a market for it. As more companies create their own virtual assistants, for the car or for virtual caregiver or whatever, they’re going to need that content that’s told by, like, one personality. And those are the types of stories that we are creating. So I think they will become useful later on as the voice assistants become more pervasive.

• WHAT IS THE PROJECT OR BOT YOU’RE MOST PROUD OF?

I’m always most proud of whatever I’m working on currently. Nowadays we are building a big kind of imaginary world experience that we’re getting ready to submit to Amazon for certification for Alexa, and we’re working with a lot of authors to put content into it.

It’s like you’re entering a virtual cafe, and you get to meet all these different characters. Then they talk to you one-on-one, and draw you into their lives and they perform stories. So I’m really proud of that and it’s been a long time developing it but hopefully It will resonate with people when we will release it. So I’m looking forward to that.

• WHAT IS THE MOST IMPORTANT THING FOR A CHATBOT OR A VOICE ASSISTANT?

It depends on what the use case is, what are you developing something for. With what we’re doing at Chatables, these imaginary friends, for us I think the most important thing is to create an experience where the virtual character makes the listener feel good about themselves.

Hence, you want to engage with someone that acknowledges you and makes you feel good about yourself. That’s why your best friends are people that acknowledge you as a human being and include you in their conversations and make you feel good about yourself. You’re not going to hang out with somebody that’s always sarcastic or putting you down or you know, ignoring you or whatever.

So we need to create more experiences where those interactions make us feel good about ourselves and what we’re doing as human beings.

• TELL US The best story that HAPPENED TO YOU as a conversation designer.

We try to create a new type of storytelling that’s different. You as the listener are hearing a story, but the storytelling chatbots are interrupting the story to like ask you questions. We want to make it conversational but obviously there’s a lot of constraints with the technology. We can’t ask a lot of open-ended questions and wait for you to respond, because we wouldn’t be able to manage that, right?

So we tried for several months to create a type of story that would engage people. We just feel like now this isn’t really working. One day my colleague was listening to a test story and his spouse was in another room, and he didn’t really realize that she was listening. As he was listening to the first episode, he was responding to the narrator, when they ask questions and so forth. And the episode ended and it’s kind of like a cliffhanger story.

It’s one of those rising action stories were, it evolves over multiple episodes. So he stopped what he was doing, and then a couple minutes later his wife comes in. She’s like, ‘Wow, are you going to play the next episode?’, and he’s like, ‘what are you talking about?’, She’s well, I was listening to what was going on and I want to know what happens next.

So that was pretty cool. We thought – all right. well, maybe we’re getting closer to figuring out what type of stories work and what the interaction is like. It’s little things like that that kind of keep you going, you know?

• Whoever wants to join this area of conversational AI, conversational, storytelling chatbots, what tips or advice can you give them?

Well, if you’re interested in the kind of things that I’m interested in, creating these virtual characters that engage people with fun stories – I would say, there are a lot of different paths you can go down. If you like ‘choose your path’ type stories where you pick a path, there a lot of tools for that.

We’re doing more conversational things. So if that intrigues you, you can go to our website at Chatables.com. And I actually have written several guides and created videos, you can download and see if that’s something that you’re interested in.

I mean, this is kind of self-serving. But I do think if you are interested in that type of storytelling, it’s good to work with us. We’ve already built out all the technology. We created this imaginary experience a new story can just fit into it. So you don’t have to create your own skill or build your own tools. You can come to us, very easily try it out. And I’m always looking forward to working with authors and helping them craft their stories. I’m starting to get more experience about what works and what doesn’t work. So I’m very happy to help people shape their story into something that might work.