Eric Kades: Every Sales chatbot needs to have a human safety valve 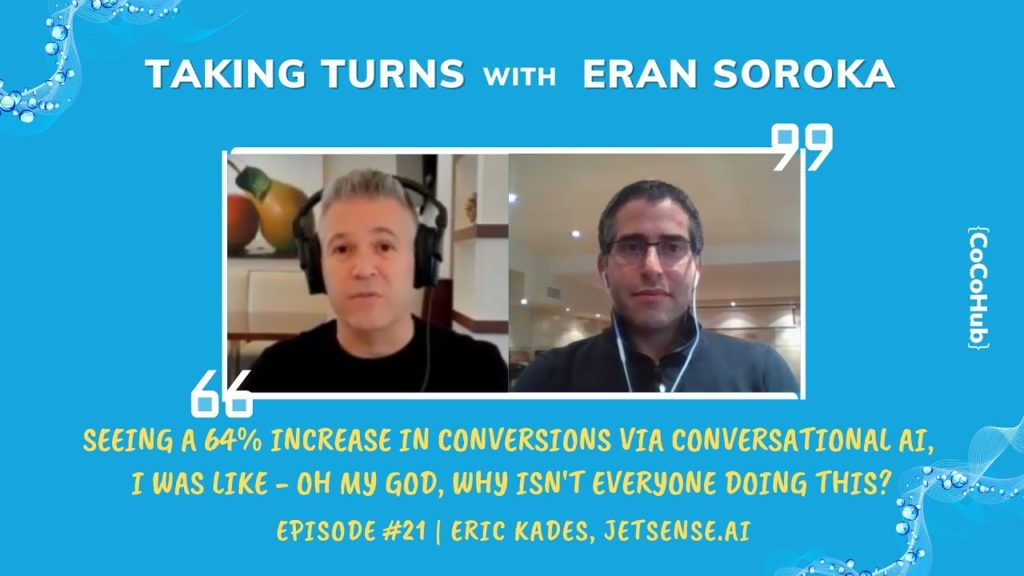 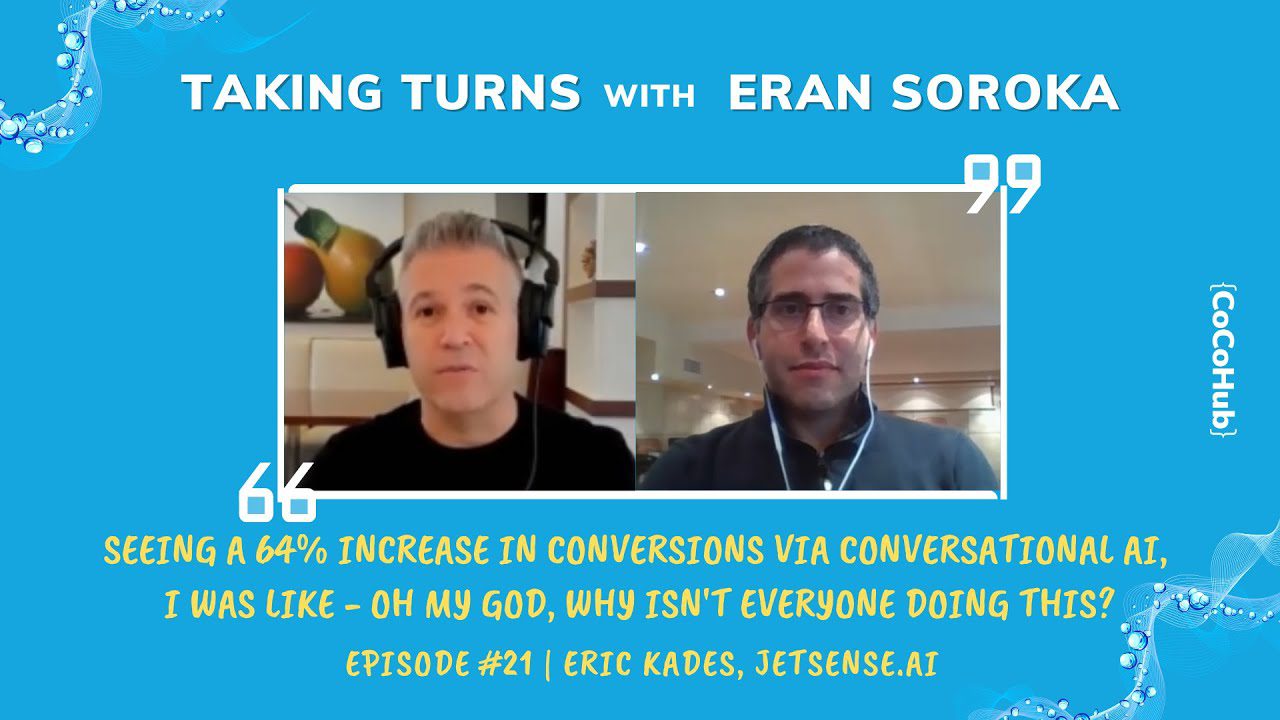 The eternal debate, of how to build a successful sales chatbot, usually revolves around the amount of automation vs the amount of human touch. Eric Kades, Founder at TextChat by JetSense.ai, believes in combining those two. On the one hand, automating and accelerating the user’s engagements via conversational AI; On the other hand, have a human being ready to intervene if the conversation is spiraling out of control. In our latest Taking Turns episode, he explains his rationale, and give great examples of how a sales chatbot turned a campaign upside down.

So, how did you come to conversational AI?

Well, I have to say it wasn’t something that I was dreaming about in grade school. Neither I thought when I was a child about being in the call center industry, but I’ve been there for 20+ years. Over time, after experiencing probably a billion phone calls or so, in 2013 I decided to jump into the live chat business with a live agent answering live chats on your website. So I started a company that answers live chats with human beings for 50 plus colleges and universities.

Then, in around 2014-2015, I started to hear about these things called chatbots. And I thought to myself, oh, my God, they may put our live chat agents out of business someday. This is something that I should start learning about. Subsequently, in about 2016, I decided to dive head first into the pool and hired a brilliant CTO and we started out building our chatbot platform.

How can chatbots improve conversions and generate more sales for businesses?

I have a great story about that. So the first chatbot that we built was actually an SMS chatbot. However, eventually we evolved to web-based conversational design and a chat widget that would pop open into a chatbot. Among our first projects, we worked on was a radio commercial that the announcer would tell people to text in to a short code number, and they would get a text back with a link to a web form, a lead-gen program. Actually it was a school, to become a certified professional trainer. So, when you clicked on the link, you would normally go to a web form.

Well, it’s a multi-million dollar radio campaign that had been running for years and we had just built our platform. I said to the media buying agency owner, I have an idea. Why don’t we turn that form into a conversation? Instead of trying to fit your name in the form, it’ll just say ‘hi – can I have your first name, last name?’, etc.

Low and behold – 64% more people started filling out the form. As you could imagine, on a multi million dollar radio campaign, to see that kind of increase was like, ‘Oh, my God. These things are here to stay’. It was a very exciting moment. They went from, 22% of the people were filling out the form – to 36% with a conversational interface. Actually, it was so successful, the company ended up selling their business because of the increase in leads from the sales chatbot.

But why are people preferring to talk with a conversational interface and not fill out forms?

I think it’s just more engaging, it’s more interesting. You’re being spoon-fed instead of asking someone to click here and there and here. It’s just asking for the information, you’re just filling it in, it’s much more like you’re texting with a friend.

What’s the project or bot that you were most proud of? Maybe the one you mentioned?

No, there’s really one that will stick in my mind for the rest of my lifetime. When we started on this endeavor to build our chatbot platform, I had been working in the higher education space for a long time. There, I became very attached to a cause of low socioeconomic status students here in the US and particularly in community colleges. Although I’m not sure listeners might be aware of this, in states like California 70% of students drop out. They do not get their associates degree, which is an alarming number. The reason is that these students – no one else in their family went to college before.

They are really in community college because they don’t know where to go after high school. So, I became close friends with the top higher education researcher at UCLA. Then, I was telling her about the chatbot platform that we were building.

We could build an SMS chatbot, and we designed a study to help these low socioeconomic status students get financial aid, which is a very difficult thing to do here. Even if your whole family went to college, to even go through this process is very difficult.

Previously on Taking Turns | Check out the full playlist

What’s the one thing that every chatbot must have, in your opinion?

Although you might not like this answer so much, I think still, there needs to be a human safety valve in every sales chatbot. Because what we don’t want to do is frustrate a customer that uses a sales chatbot. And if what I can call sometimes in a conversational interface ‘Wrong Answer Hell’, where if the chatbot keeps coming back with the wrong answer, if you don’t want to disappoint a customer, you want to have that safety valve to go to a human.

Now, over time, this won’t be as important. But I think still today, whenever you’re designing a conversational interface, you still really need to have that safety valve of being able to transfer to a human being if necessary.

Okay. What’s the secret sauce, so to speak, of building a good sales chatbot?

First of all, in a sales chatbot, you have to ask the right questions. However, you know I’m going to fall back to this – it’s still that capability of transferring to a human. Because at the end of the day, no one is going to sell, especially a higher priced product – as well as a human being.

That doesn’t mean chatbots aren’t going to get there – some day, in the next 5 or 10 years, a sales chatbot may be as good as a human being. But also, what we’re finding is conversational interfaces are really, really valuable with supporting someone. So, I think there needs to be a fine distinction between when is it right for a conversational interface, a sales chatbot, in the customer’s experience – And when is it right to transfer to a human being. Absolutely, it starts the engagement of the customer with the brand.

What is the funniest or awkward thing that happened to you while designing chatbots?

Some of the funniest things are when you’re training a chatbot, it might come out and say something to someone just totally out of left field. However, I would say the most interesting thing, though, is that really that increase in conversion that we saw. So, in marketing in general if you see a 5% or a 10% increase, that’s mind blowing. Then, seeing a 64% increase in conversion was like – oh my god, why isn’t everyone doing this?

Do you have any other examples of increase in conversion percentage via sales chatbots, that you saw in various projects?

On one instance, we built a HIPAA (Health Insurance Portability and Accountability Act) compliant chatbot, that recommends incontinence supplies to people. So people that are having problems were able to use the chatbot. And we saw about a 27% increase over people signing up to get these supplies, first filling out a form on a web where they had to go through a lengthy process. Because it was conversational, they were much more apt to try a new product.

If somebody wants to get into conversational AI, what tips can you give them?

Hence, one of the most important things is that while you’re designing – make sure that it is saving the customer and the business time. So that is really, the underlying why of our company Jetsensi.ai, why it exists – is to give both our clients and their customers their time back. Time is really our only non renewable resource. So if you can use a conversational interface to make someone’s life more efficient, you’ve given a gift to the world. And I think that’s very important.

What can you tell us about TextChat?

So TextChat is actually a product that we created by accident, and it’s our flagship product. Although it’s a very simple chatbot, it’s the first that I’m aware of that is able to take a chatbot conversation and transfer it to a text message. So when there’s a point in the conversation when someone wants to speak with a human being – it sends a text message to you. When you click on a link, you’re in a conversation with the person after the chatbot. So that’s really been an incredible innovation. When all live chat platforms out there require you to either be logged into your computer to respond or you need to be on a mobile app. We’ve converted it to a text message, and it’s a really cool feature.

We built it for ourselves because we weren’t able to answer our own live chats on our website. Now the text message goes to several people. Then, if they want to talk to a human, whoever clicks on the link first is in the conversation with the human. We get every live chat now, it’s been an unbelievable innovation. So we’ve given it to 60-70 small businesses. Although every single one of them have used live chat before, they were never able to answer their live chats. Now they’re answering them all and increasing sales. For some of them, 50% of their text chats turn into sales.