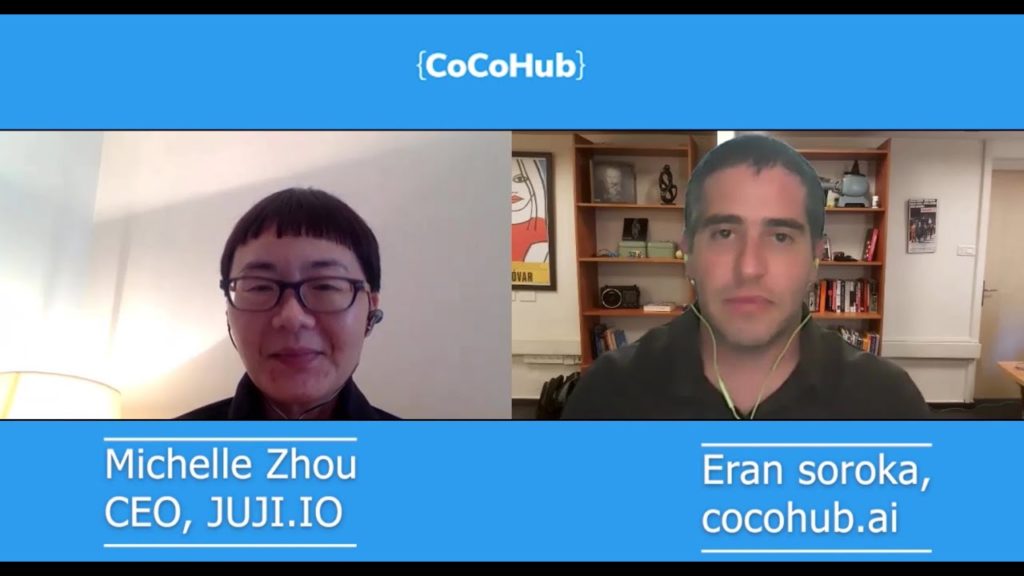 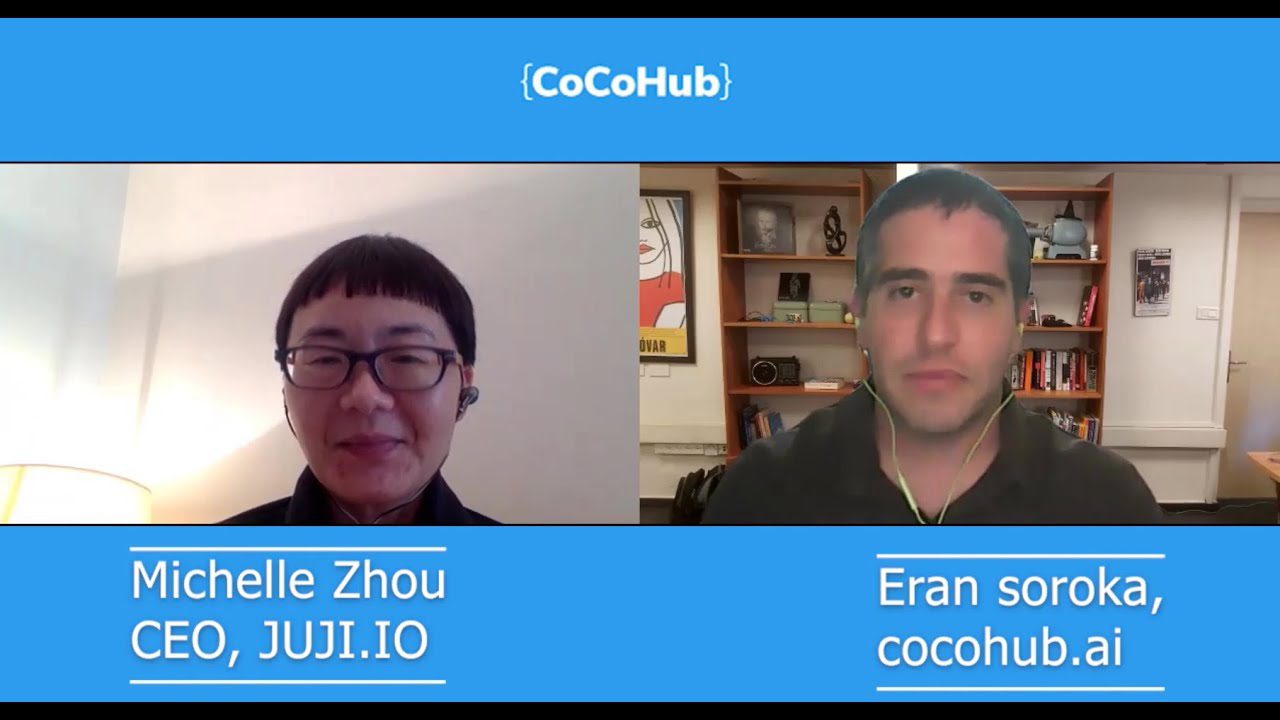 After working in the intersection of human and computer’s communication for about 20 years, Dr. Michelle Zhou knows a lot about how to make this connection as natural as possible. In 2017 she founded Juji.io, an AI platform that “democratizes the creation of powerful AI helpers with radically simple building blocks, while delivering enterprise-grade, superior conversational AI power”.

At our new show, Taking Turns – A conversation designed for conversation designers – Zhou, a Chongqing, China native with a PhD in computer science from the Columbia university, joined us to tell about her expertise, share some tips – and explain what happens when a chatbot has a brain freeze.

Before Juji, I worked at IBM research, and then the IBM Watson group for about 15 years. My first big project at IBM was a project on conversational AI, almost 20 years ago. We started by creating conversational AI to help people access massive amounts of information in large databases. You can issue natural language queries, like “show me my accounts” or “show me all my accounts”. Then you can drill-down by asking “just the checking accounts”, or “just the balance in September 1989”. As you can see, you’re having a conversation with the system and use the conversation to access information.

You asked me how I got into this field. It’s because I’m a computer scientist, and I have always been working at the intersection of human-computer interaction and artificial intelligence. And the most natural way for users to interact with a computer, is to have a conversation. So that’s how I started working in this area. I wanted to make sure that humans can really have a conversation with a machine in the most natural way. Most importantly, they can get the help they need and want.

• WHAT’S THE BOT OR PROJECT YOU’RE MOST PROUD OF?

There are actually two. At IBM, we did this almost 20 years ago, it was “Real Hunter“, which is the best at supporting natural language queries to retrieve or to explore massive amounts of data. Even after 20 years, I still haven’t seen any other products or projects that can compete with what we did before. Technologies have advanced quite a bit, right?

HAVE YOU SIGNED UP FOR OUR HR/AI PANEL, ABOUT RECRUITING USING CONVERSATIONAL AI?

In the academic world, people also often talk about making a conversation “mixed initiative”. So it’s not only one-way messaging – you want to enable your chatbots to ask questions and answer questions, which makes a genuinely useful conversation. In short, you want to enable your conversational AI, your chat-bot, to actively listen to their users – and to respond to their users appropriately – versus just a one-way communication, one-sided broadcasting. This way you can make your chatbot have a skill that only a human can have – called empathy. You want chatbots to listen and react to users – appropriately and empathetically. That’s one of the most important, I’d say, principles that a conversation designer should keep in mind, as they do their best to instill such active listening skills into their chatbots.

• WHAT’S THE ONE THING EVERY GOOD CHATBOT/VOICE ASSISTANT MUST HAVE in its conversational AI?

I think it would be very important to design your chatbots to do what we call “mixed-initiative conversation”. Chatbots can guide a conversation, but in the meantime, actively listening to users’ requests and users’ needs during the conversation and to respond properly. Enabling two-way communication is one of the most essential characters of an effective communication, effective human-computer conversation.

• TELL US SOMETHING FUNNY OR AWKWARD THAT HAPPENED TO YOU While creating conversational AI.

I want to share with you something we have observed. First of all, when humans interact with machines, they are brutally honest. I’m using the word ‘brutally’. There is a company who used our conversational AI to interview job candidates. One of the questions was ‘When you grow up, I’m just wondering who is your role model?” – Humans like to ask such a question too. But one user, who could be an applicant or maybe not – could be a random tester, said “who asked you to ask me this dumb question?”. As you know, the hiring manager asked me to ask it! A person would never say that to another human. But he just said it to a chatbot.

Humans are brutally honest with chatbots. If they were having a conversation with another human, probably they wouldn’t make such a comment. And they don’t think a chatbot is judgmental and they think chatbot is just a machine. So if they think the question is dumb and they speak their mind, even though this is a very serious situation of a job interview. Another part is that like other psychologists found out, we found out too, when humans interact with a chatbot, they do apply the same social protocols as if they interact with other humans.

“I just had a hiccup”

So, sometimes chatbots are not perfect, they have bugs and they make mistakes. At one time our chatbot said that “oh-oh, I’m sorry. I just had a hiccup, let me recover”, and then other times our chatbot said “oh, oh, I’m sorry. I just had a brain freeze”. You know what happened? They knew that’s a chatbot, so this one person said, ‘Oh, I’m sorry to hear about that. Whenever you have a hiccup, always take a deep breath. Can you do that?’ So that’s kind of very funny.

This is very interesting… because of this phenomena, because of the experience we have observed, it makes us more excited about it (making conversational AI). You should really make your own chatbots, since we could humanize chatbots. Today I just shared a chatbot design tip – Make a chatbot actually do what normal humans do. Don’t repeat the same thing over and over again. So make your chatbot engaging and your chatbot conversation much more lively, much more humane.

So we’ve created an awesome conversational AI platform, especially helping people who don’t have the IT expertise to create a very powerful chatbot or conversational AI, especially with two special powers: first power is enabling it to managing very complex mixed-initiative conversation, which means – answer questions anytime, they can guide you go through the workflow very easily, especially despite interruptions. A second special skill it is that our chatbots, it’s almost like a psychologists, they can read between the lines to analyze a user’s chat text on the fly. So they can actually infer what the user likes and dislikes, personalize each conversation on a fly as well. So that makes each conversation truly personalized, and truly actually making them feel like it ‘ah! you really get me’.