Localization, UX and Conversation design: What do we have in common? 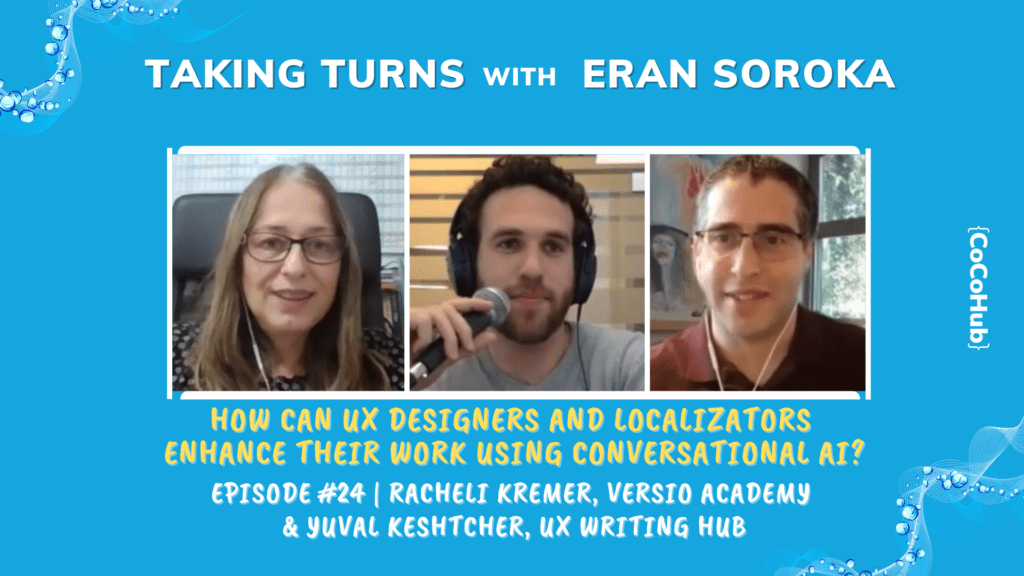 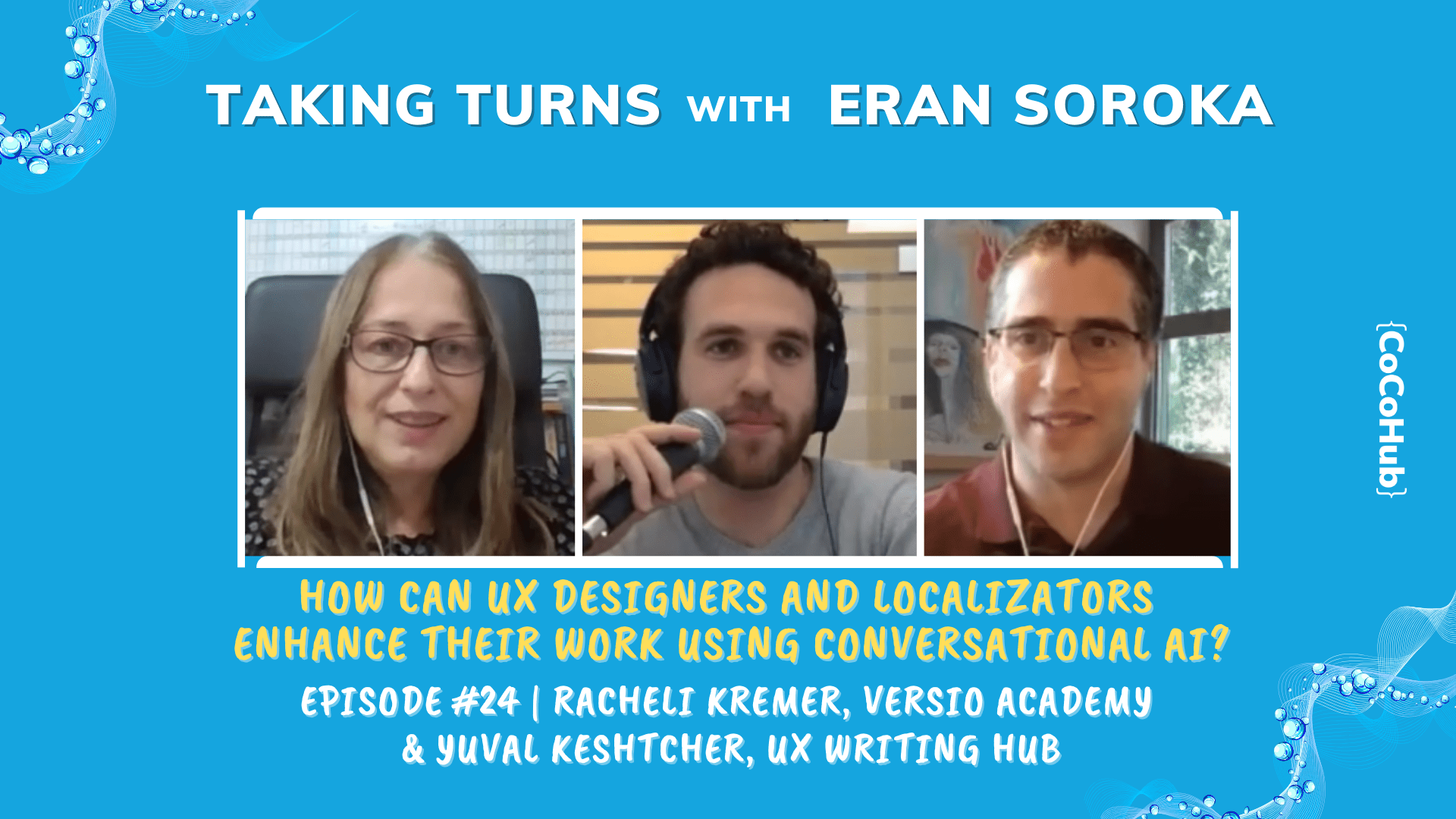 Nobody is born as a conversation designer. It’s one of the world’s emerging professions, but some people weren’t even called this way when they started working on an obscure thing called a “chatterbot”, 5 or 20 years ago. So, while this profession is still developing and while technology offers new opportunities, tools and practices, there’s tremendous value in looking to other, similar professions and specialties from the digital world – such as UX design and localization.

So, what’s better than to talk to people from these fields, and understand the points of similarity and what we, as conversation designers, can learn from them. In the latest Taking Turns episode, I turned to two masters of those professions:

* Racheli Kremer is the CEO and Founder of Versio Academy – the first school in Israel for localization. Wait, what is localization? Is it translation? Hint: No. (We’ll get to that in a moment).

This April, in collaboration with Versio Academy, CoCoHub will conduct the first ever academic-like course in conversation design, with 12 weeks, consisting of three courses: Basic (3 meetings) | Advanced (5 meetings) | and Experts (4 meetings).

* Yuval Keshtcher is the CEO and Founder of uxwritinghub.com – one of the world’s biggest communities of UX designers in the world, with close to 10k registered users. He’s also the host of the Writers in Tech podcast, where he brings along some of the biggest names in the industry.

What have I learned from 20+ minutes of an eye-opening conversation? Let’s start.

1. The best website won’t cut it, if it can’t talk to you

Wait, since when can screens talk? Ok, maybe that’s an irrelevant question nowadays. The crafts of Microcopy and UX teamed up to make digital interfaces much more accessible, engaging and easy to understand. However, there’s a need for a clear call to action in order to encourage the user to do something, which is pretty similar to real life. As humans, we try to drive other people to perform actions through call to actions (Vote! Buy! Watch! Take it out to the streets!)

This call to action and the text leading to it, a lot of times, will reflect the spirit, value and language (including tone and voice) of the company or business operating the digital platform. Likewise, the chatbot’s starting prompts can do the same, just in a more friendly, casual way.

2. UX Designers are basically conversation designers, they just don’t know it yet

In that spirit, Yuval says that “in UX writing, the conversation is most often one-sided”. So it seems like the distance between UX writers and conversation designers isn’t that big.
When you create the first “prompt” of the conversation as an interface, your work doesn’t stop there. After all, the follow-up screen will be a continuation of the previous one, depending on what you did in it. Hence, it resembles a conversation flow for a chatbot.

– When you convert users to the satisfaction of the site owner, you’ll probably get positive reinforcement for your choice, and/or an appreciation note from the seller. In comparison, in chatbots, the follow-up message will probably be the same.

– If you left items on your cart, the interface will try to understand why the transaction wasn’t completed. Similarly, the chatbot can identify that an action wasn’t performed, and will ask you why.

– If you clicked on a broken link, you’ll probably be sent to a 404 page; With a chatbot, we call it a fallback.

Previously on Taking Turns | To the full playlist

So, taking into account the fact that while building a funnel, an interface doesn’t end after one page, the similarities to chatbot flow-building are striking. Surely, the main difference is the number of screens you have to go through in a funnel. Actually, a chatbot’s log will reveal that.

3. We all come from same godmother, and no, localization is NOT translation

She emphasized that localization “Refers to the graphic components, the audio-visual components, to the language and to the interface, directionality, etc. Localization is key for any company that wants to speak to each target audience in their language, whatever that language is and wherever those end users are”. So, it’s much more than translation. Never mistake a localization expert (a.k.a “localizator”) for a translator!

While the community of localization practitioners isn’t the biggest in the world, it’s hard to argue with Racheli. After all, when creating a chatbot, we do take into consideration things like the desired user’s gender, age, socioeconomic status, etc.

Typically, conversation designers are more concentrated on the way all of those traits reflect in a dialog. For instance, how to start talking with somebody, how to handle positive and negative responses, etc. While they’d still love to boost the discoverability of the chatbot, most of the time they leave handling the graphic needs for people like UX designers.

4. All of our nightmares include frustrated users

As Yuval says, “Companies can’t afford to have a bad first impression on the user; When the chatbot doesn’t get you, there’s a really great likelihood that you’re not going to use it ever again”. We couldn’t have said it any better.

I have witnessed, first hand, chatbots becoming the joke of the class, when they couldn’t answer the user’s needs. When this is a chatbot built by a large company, it can ruin the company’s reputation or tarnish their image as user-friendly or user-oriented.

Hence, a bad experience of this kind can resonate and become viral – in a very negative way.
Inevitably, the website or app interface is one gate for the users to meet the company for the first time. However, once you have a chatbot on the site – it can create the first actual interaction or touchpoint with the user. Then, it becomes as important as the interface itself.

> Voicebot.ai: How CoCoHub shepherds chatbots to your Zoom meetings

> Why do you need to give personality to your chatbot?

> 6 Use cases for Chatbots on Zoom: Your new marketing strategy

5. Chatbots will not replace us! (But they can enhance us)

Robots have already driven people out of assembly lines, industries and call centers, so there’s an understandable tendency to be deterred. After all, a great chatbot can imitate human-like interactions to a very realistic degree. So if they’re about to drive humans out of more places, why aren’t we resisting the movement?

Actually, the simplest answer is that there won’t ever be a replacement for the human touch. Surely, a robot can calculate a lot of data and make judgements based on it. With that said, it doesn’t have (yet) the full abilities of a human being, when it comes to empathy, body language, experience, gut feelings, and patience.

The world demands more from us now than ever before. As a matter of fact, multitasking has become the norm, and every minute of every day has become more valuable. In this reality, we all use automation, machines and robotic tools, whether we like it or not. We use it to wake up in the morning, prepare the best coffee in one click, avoid traffic jams, take us up to our 34th floor, schedule meetings, buy food or order groceries etc. Then, AI can make your work even more efficient, as said on the recording. For example – by autocompleting and correcting phrases and sentences on emails. All of those are time-saving actions that used to be performed by humans. This frees up more time for us to do more things.

Let them work for you!

So, in this reality, we can use chatbots to work for us, instead of replacing us. It can answer the phone at 8pm and check inventory to see if a product is available or not, two hours after you’ve left to make it to a family dinner. It can schedule the meeting for you, instead of having you wasting your time checking available dates. Furthermore, it can tell the story of your company to the first-time visitor, or collect information about this person.

And, if you’re working in the digital space, as Racheli said, it can give you a great tool. One that will help your clients spare this valuable time and get a better grasp on their lives and their sales. Whether you’re a UX designer, a localizator, a content creator, a digital marketing expert – creating chatbots can make you more versatile, and offer clients the most advanced tool of engagement.