Kent Morita: “In the right context, humor is very effective” 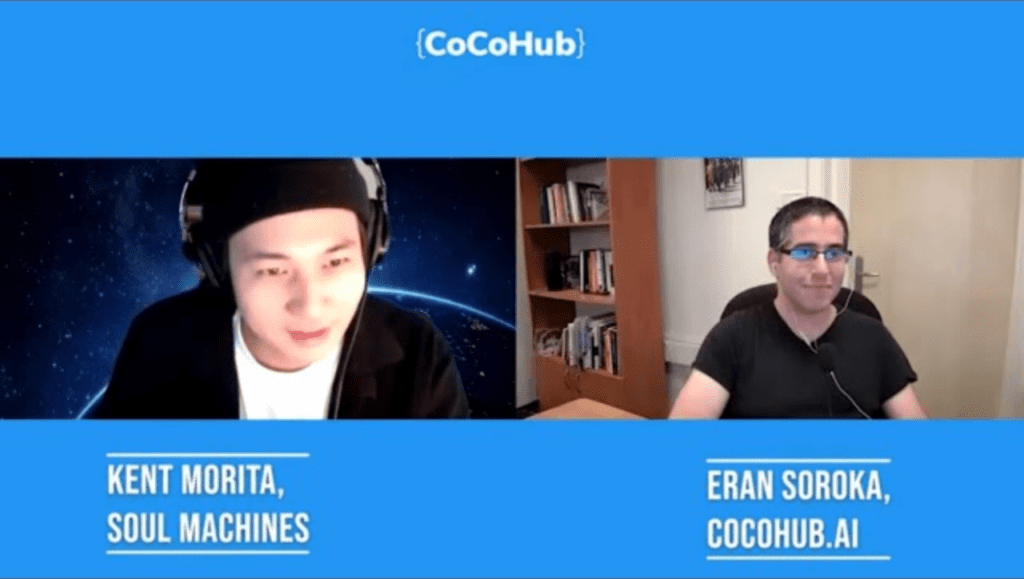 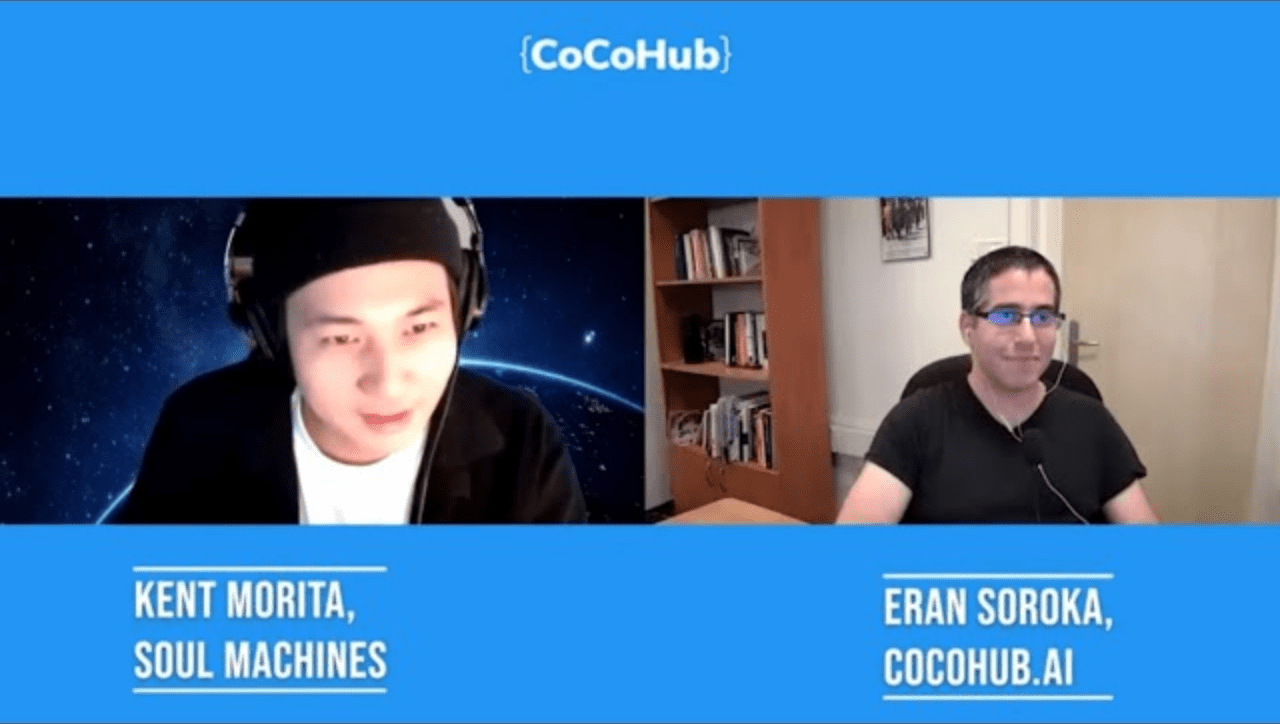 On paper, nothing seems more different between an Improv stand-up comedy show – vibrant, wild, unexpected, full of uncontrollable laughter that make you lose yourself in the moment – and a chatbot – planned, a code which is controllable by logs, while its pure existence aims to fulfill a marketing goal. In reality, Kent Morita actually sees a lot of similarities between the two; as a comedian and a conversation designer for Soul Machines, a company that specializes in creating Digital People, he explained to us how these two distant worlds coexist in a beautiful harmony – and when it is the right time and way to use humor in your bot. Morita, an NYU Math graduate, joined us for episode #5 of Taking Turns – this time, as a part of our 4th monthly meetup.

• HOW DID YOU GET INTO CONVERSATION DESIGN, AND WHAT DOES IT HAVE TO DO WITH BEING A COMEDIAN?

I used to do and I still do improvisational comedy, where I get up on stage, take suggestions, and basically just listening to what’s happening and reacting and building the conversation, if you will. So a lot of what we do at conversation design has a lot of parallels with Improv.

Throughout college I started a business for translation between Japanese and English scripts. I also did the voice acting. After few years, when I graduated college, I found a localization job at Voltage entertainment, a company that produces visual novel games where as a player you could read stories and interact with these beautiful Anime characters – a big part of it was a taking Japanese characters, and making them culturally compatible with American taste. And when I found out Google was looking for people to take an already existing persona for the Google Assistant and localize it to Japanese culture – That’s when I was able to jump at the opportunity.

• WHAT’S THE PROJECT YOU’RE MOST PROUD OF?

We are currently working at Soul Machines on this upcoming digital human that I’m super excited about. Her name is Florence, which we are developing in collaboration with the World Health Organization; Tobacco is a huge Public Health concern, which kills more than 8 million people per year. And our goal is to create a conversational experience that hopefully helps to reduce that number. The mission is great. Our partner is great. We’re super excited.

• WHAT’S THE ONE THING EVERY GOOD CHATBOT/VOICE ASSISTANT MUST HAVE?

A well-defined Persona is one of the most important things. The Persona is the North Star in terms of what everybody designs to, it defines who the conversational agent is, what they represent, what values they represent. There’s some research that showed that people make a judgment of who another person is, within like one second of meeting them. And basically, if you don’t design that impression – we’re leaving that impression up to chance. That’s why I will define persona as super important.

But also, there is nothing more weirder than – we’re having a conversation here right now, and if I start to suddenly speak with a really bad British accent, you’re gonna be really weird-ed out; “what’s going on here?”. Let’s say you have a team of multiple people working on a project – you’re going to end up with a disjointed experience, where saying ‘hello’ is being worked on by this person and saying ‘goodbye’ is being worked on by a different person. Without a well-defined Persona, those are not going to match. And then, you’re going to have a conversational experience that’s, again, just feels really weird.

• DOES HAVING HUMOR AS PART OF THE BOT HELPS, OR DOES IT LOOK LIKE “TRYING TOO MUCH”?

It depends on the context, even within one brand. For example, there’s an insurance company in the US called Progressive. They have this awesome lady who represents them on their commercials. She’s very bubbly, kind of irreverent lady named Flo. So she makes very snarky comments on TV, and it really represents Progressive as a very youthful, contemporary company. But – if you got into a car accident and you call them, and Flo comes on the line as like ‘what did you do wrong again today?’ You’re gonna be like, ‘no no no’! – This is a completely wrong persona match, right?

• Talking about humor – TELL US ABOUT AN AWKWARD, AMAZING OR SURPRISING THING THAT HAPPENED TO YOU AS A CONVERSATION DESIGNER.

I was interviewing for Soul Machines, and when you’re interviewing for a company, you research everything. Who’s working at their company? What are their products look like, how these digital humans talk. Thankfully I was able to get the job. I got into the company. I’m doing all these one-on-one meetings – ‘Hey, I’m Kent, I’m a new hire’. We had this group meeting and there’s this lady and I’m like ‘I know that person. I don’t know where I saw her, but I know this person’.

I’m not ashamed to admit it: I looked her up on LinkedIn. I was like, ‘do we go to the same school?’ No, No. Completely different school, different parts of the globe – and then we started doing the demos of the digital human turns out she was one of the digital humans that Soul Machines made was based on her, and I was, ‘oh, that’s why I saw you’. And in a weird way that gave me more confidence in our technology, that – Oh, wow, this technology. You’re so good at creating believable humans, I instinctively thought I know that person. That was a really great moment, for sure.

The honest answer is – ‘oh, you should be born into a Japanese family in America that really likes arts’. That’s my specific experience. Answering that question with confidence, ‘this is the way!’ – is pretty hard. I’ve seen here different colleagues of mine, some of them are musicians, some are playwrights. And all these people always dedicated their lives to trying to figure out what the audience is thinking of, and creating content towards that.

And that’s why, I think, learning how to do storytelling might be a really good way to set yourself off to become a good conversation designer. How do you express an idea, whilst keeping the attention span of your audience, your user, is a very important skill. So – learn how to tell better stories. That would be my advice.

• TELL US MORE ABOUT “SOUL MACHINES”.

You know that US dollar bill, right? Money used to have very small faces. And in recent years they enlarged the face, after the designers realized that human beings could easily tell that a face is wrong. Human beings have this ingrained ability to be able to tell that the face is “off”. As a counter-counterfeiting measure, they increased the area of the face. Because that’s something that humans can easily tell – wait, this Dollar bill doesn’t look right.

People have this innate ability to appreciate faces and as a part of that, human beings have also evolved to have conversation. Conversation is a big part of who we are, and most conversations happen with physical gestures and facial expression. At Soul Machines, I’m really excited because they’re working on this technology. And I’m proud to say that the people who work on these facial expressions are the best of the best. These are Academy award-winning visual teams, and they’re working on creating these effective expressions.

And as a conversation designer, as a content designer, I’m so excited to be part of a team that emphasized the importance of that. Because I know through experience being on stage how important it is to be able to make those facial expressions. That can make or brake a joke. That can make or break the effectiveness of the content that we’re delivering. That’s what so great about Soul Machines, they’re focused on facial expressions and a more complete picture of what conversations are about.