Jeanna Isham: The right sound can make all the difference 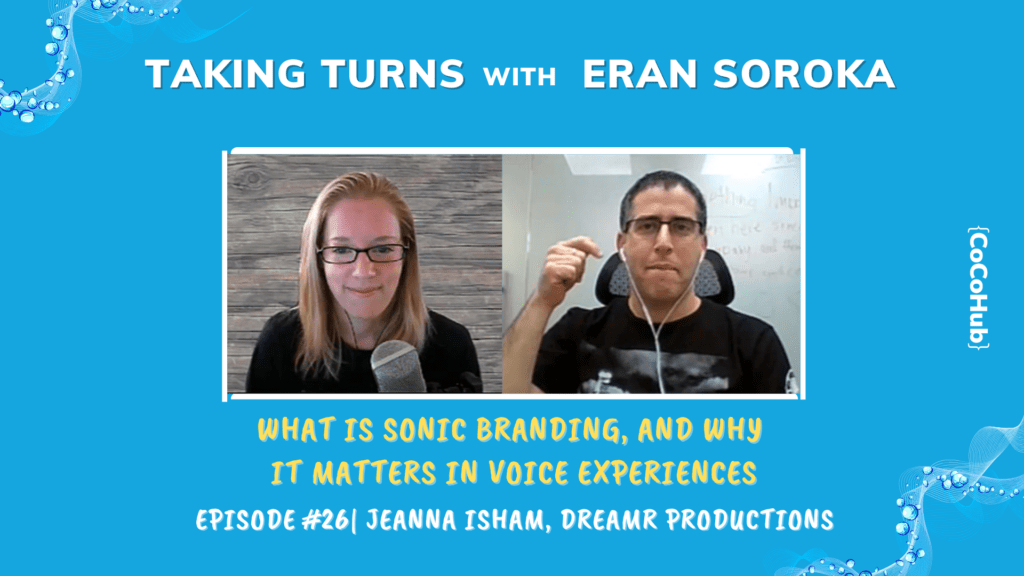 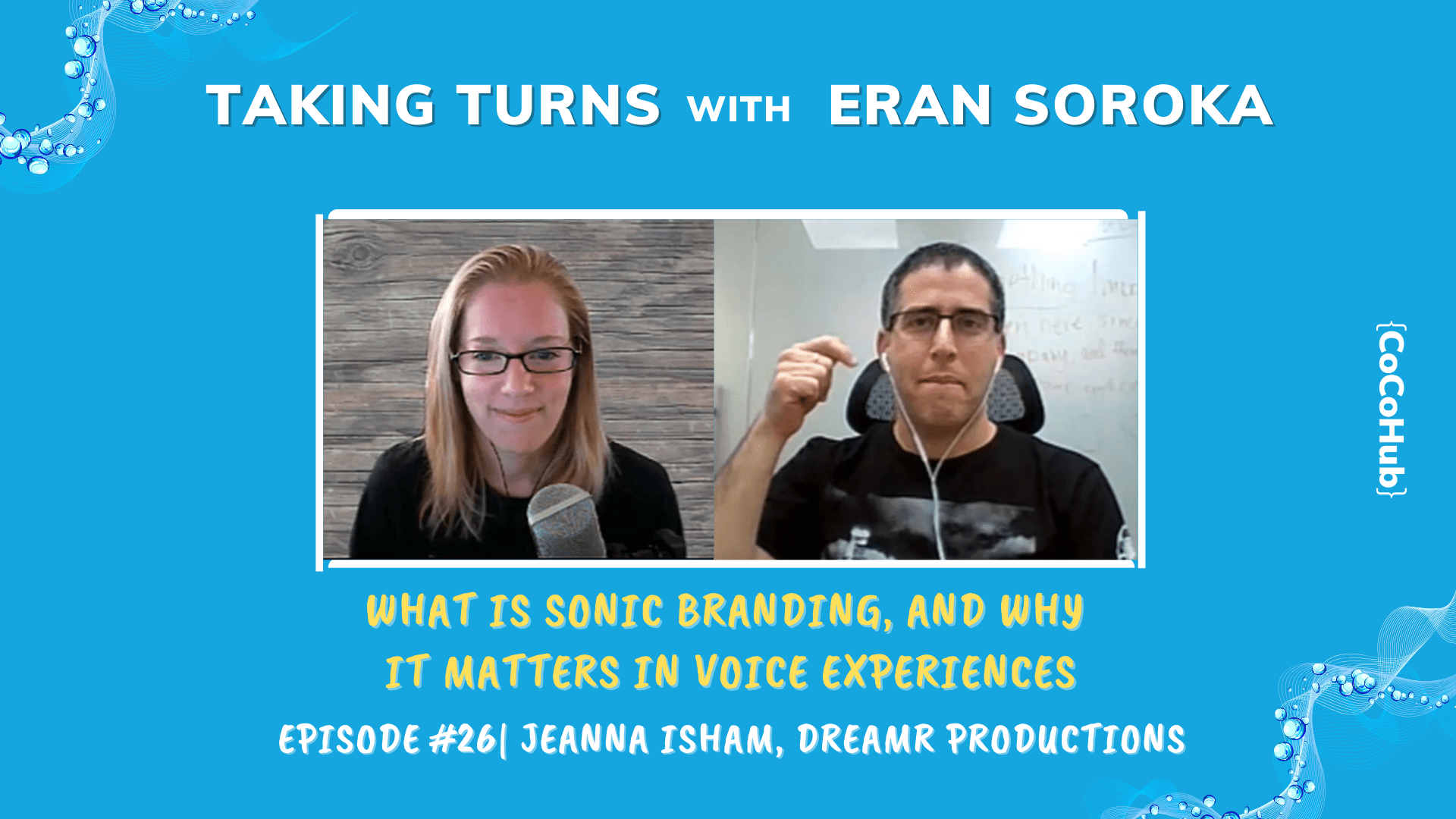 In the world of #VoiceFirst, not only every word – but every sound can matter, too. The right sound can become a trademark, trigger emotions or feelings – while the wrong one can deter people from using your product. That’s why the “Sonic Brander” profession came to our lives, and today, in the 26th episode of Taking Turns, we turn to one of the finest in the sonic branding business: Jeanna Isham from Dreamr Productions in Los Angeles.

Jeanna is a three-headed sonic branding wonder: she composes music, consults companies and educate people on the importance of sound in marketing. She also co-hosts the VoiceLunch audio and branding. Let’s hear from her.

How did you get to sound design? And what is Sonic branding?

I started in composition, have a degree in music composition, and wanted to be the next John Williams. However, that turns out to be really hard. So I got into production music; In reality TV shows, it’s all that music that they just pump in every moment. Since I like to work on projects, I didn’t really like production music. Projects are like ‘you need to write this, and I’m looking for this exactly’; While production music was just ‘write something that goes on Duck Dynasty’.

Since I needed a little bit more information, that didn’t work for me. In the meanwhile I just happened to work with a brand, and they were looking for a piece of functional sound. So their piece of hardware, it needed an on/off sound. Then so I created that for them, and I’ve just kind of been doing it ever since.

The reason I love it – I actually try and come up with a personification sound for a company. Which I feel is way more beneficial – and it lasts. When it’s done right, it’s going to be a part of that company culture for a long time.

How can sound make a conversational experience better for the brand, and for the customer?

Previously on Taking Turns | To the full playlist

David Devoto already knows what his customers want from a chatbot

What’s the connection between UX, localization and chatbots?

Lorena Restrepo creates trust between a digital bank and its customers

Do we have a use case in which the right sound design helped a brand thrive?

First of all, I use a lot of different examples, and I try and change it up. So a really good example is Coca Cola with their pop and fizz sounds. Not even the music they use in their campaigns – just that pop and fizz sound. I don’t know about you, but I hear that – and then I get thirsty. It’s very, very effective.

However, it’s very effective because it draws into a very unique sound that other brands make. But Coca Cola actually committed to it and stuck with it. As s result, when you hear that, usually generally your brain will go to their brand.

Your expertise is absolutely mashing up with the rise of voice tech these days. How do you use it?

So, I do a lot of different things. I write it, of course. I also consult on it. It’s such an obscure thought right now that I actually kind of sit with brands and work with them for several months on end. Then, the aim is to try and understand what Sound would mean for them. Because it’s not something that you can just go, ‘This is what your Sonic branding is’.

After all, every company and every brand is different. So they really have to think about it. Also can’t decide for them because I’m not that brand. In other words, they need to come to that conclusion with a bit of hand holding.

Besides that – because it’s such an obscure thought at this point – I also educate. Right now I have a course that you can find at SoundinMarketing.com – And it’s called “Sound’s Power and Influence in Marketing”. By the end of 2021, I hope to have two more courses. One, what is Sonic branding, and the final one about sensory marketing.

What is the project that you’re most proud of?

I like working with companies and creating sound. Then, to get to that point with a company where they go, ‘Oh, I could sound like this!’, and it’s not me talking. Rather than that, it’s them starting to brainstorm, and I can see the wheels turning in their head. When they’re thinking independent of my prompting – that’s exciting.

I love to see that because I have a knowledge of what Sound and Sonic branding and Sound and marketing could be. With that said, I can’t envision something that’s so close to them. So it gives it its own new life outside of me. Hence, it’s really exciting to watch that happen.

What’s the funniest, or most awkward thing that happened to you as a sound designer?

As I was trying to think of that, I don’t have anything awkward, per se. However, the funniest for me was that I came along a company and they needed some functional sound. After I wrote 3 draft ideas, I sent it over. Then they said, ‘We like the second one’. So I go, ‘Well, this is a draft. Let me finish it up’. ‘No no no, we want this one’. And so, my draft ended up being the sound that they used.

It was kind of strange to me: one shot, and they liked it. So that’s good.

How to give your chatbot a face on Zoom?

Your chatbots needs personality. Here are the reasons why

What is a happy path? And a conversational funnel? Check out our glossary

What tips or advice would you give to people who want to enter this profession of sound Branding or sound design?

First of all: Research, research, research. When I started to look into it, there was a lot of research I had to do. Already understanding the idea of music making a difference, thinking so much further than just a song – there wasn’t a lot of writing on it. Back then, I wasn’t finding a lot, so I had to dig for a while.

Now there’s more and more articles and research and case studies that you can come across. Really, just go down that rabbit hole and see what’s there is because sound is so big. And if we limit ourselves to just the idea of music, we are limiting our possibilities in branding.

What can you tell us about Dreamr Productions?

Like I said before, I basically focus on three things: I create, and I consult and I educate on the power of sound in marketing. Then, I have a lot of different companies that I consult with and work alongside.

Furtherly, some industries that I’m really excited for in the Sonic branding space is Pharmaceuticals and e-commerce.
Because both of those industries have a really cool potential to excel in voice first. First, with e-commerce, I have no idea how they’re going to do it. However, with voice first, with smart speakers and smart technology, we can add the fact that we’re looking at our computers less and less.

So how does somebody on Etsy stand out if people are just using their smart speakers? How they can crack that nut and figure out how to have a voice for themselves, and be searched and found on smart speakers? So, I’m very excited to see what happens with that. Although I don’t know how it’s going to work, I’m excited for that.