Hillary Black: “Chatbots are like social media on its early days” 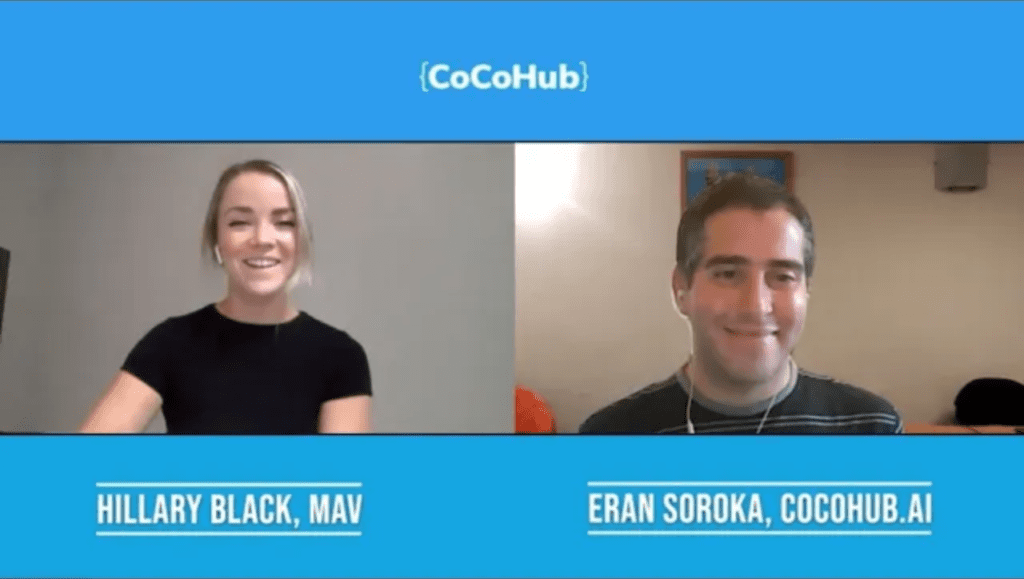 She didn’t have a UX or a development background, but nevertheless, Hillary Black became an expert on the conversational AI field – as her company created an automated two-way texting robot that helps out Fintech companies. Hillary combined microcopy, social media, and persona-building, and tells us, in the current iteration of Taking Turns, how she took her best practices and adapted them to the new world.

I definitely have a wide variety of experiences, but my background is primarily in copywriting, in all sorts of digital writing and blogging, and then I got into social media in 2012. Then, I spent a lot of time writing content for social media, and that got me into that microcopy state of mind. I worked for a lot of different companies, brands and agencies; from the University of Michigan, to the agency for Beats by Dre and then my last official job before starting my own company was at Vine, so at Twitter.

I was doing social media through all of that, and afterwards I decided to branch out on my own and start consulting in social media and creating brand personas, as I spent so much of my career building brands and building digital brands. In the end of 2016 Facebook announced Messenger chatbots, and one of our customers approached us about designing a bot, and we really didn’t know anything about what we were getting ourselves into. So I sort of took all my knowledge from creating new brands, writing social media content and just created what I thought was a good chatbot script, and it all sort of expanded from there.

We got more and more people asking us to write for chatbots. I did a lot of research of my own and started studying people who have been doing that in the past, and over time built my own best practices in conversation design, specifically for Facebook Messenger. Currently, I do SMS conversation design.

ALEXA SKILLS DEVELOPERS? CREATE YOUR OWN SKILL – USING OUR COMPONENTS!

• WHAT’S THE PROJECT YOU’RE MOST PROUD OF?

Mav is a product company now, so our automated two-way texting is central to all the experiences that we do. And I’d say that it’s the combination of all of the best things that I’ve ever done. So the best conversation, the smartest conversation, the best error messages, the best natural language understanding. And so it’s just really like all of the combination of everything that I want to be, just like that perfect way.

• WHAT’S THE ONE THING EVERY GOOD CHATBOT/VOICE ASSISTANT MUST HAVE?

I will definitely say value. There has to be a purpose of why you are designing the chatbot. There has to be that sort of end, concrete goal that you’re able to communicate to the audience. But then also, the company that you’re creating the bot for needs to understand why they have it. It’s similar to like social media in the early days. People wanted to just have accounts on every platform, but you need to understand – Why are you doing that? What are you bringing to the user? And then how can you really design an experience centered around that, then accomplishing whatever goal you set out.

• TELL US ABOUT AN AWKWARD, AMAZING OR SURPRISING THING THAT HAPPENED TO YOU AS A CONVERSATION DESIGNER.

It’s not necessarily chatbot related, but I did create a bunch of automated Twitter accounts that would reply when you would mention them. And so there’s been many times where brands will be listening for certain keywords. They will just send out a bunch of automated messages to my bots not realizing they aren’t people. So the back and forth has sort of taught me, like, okay – this is not best practice. I need to make sure that people are understanding you have to actually be listening for something relevant, and then understand that you’re not talking to a bot. It happened multiple times, especially on Twitter.

And then, learn everything that’s out there. There are a lot of free resources. There’s a lot of books. There’s a lot of networking groups. I personally have an online course, of course, I would refer people to that, and then I have a Facebook group of conversation designers. So that’s a really good place to meet people who have similar interest to you, people who are working at companies doing whether you want to design for voice or messenger websites, or higher education, HR.

There’s a lot of different people out there. And so – start networking and talking with people that are already established in the field, asking how they got in. It’s existed for a long time and it’s very emerging. There are still a lot of opportunities to find your own way in.

• TELL US MORE ABOUT YOUR COMPANY.

Mav is an automated two-way texting robot. We help Fintech and mortgage companies qualify leads, nurture leads, all through automated texting. And instead of the texting you’re familiar with, one-way broadcast, the automated blast where you’re sending a link, you can actually have a two-way conversation between a bot and a human. It can qualify your leads, follow up with someone who might have dropped off during the application process. And we’ve seeing a lot of great success being able to convert leads through text because it is a platform that everyone uses and everyone knows how to use.